In early 2019, the WSJT-X development team created a new mode called FT4. In releasing the protocol, the team wrote “FT4 is an experimental digital mode designed specifically for radio contesting.” With the inclusion of FT4 in 2019, the FT8 Roundup was renamed FT Roundup with both FT8 and FT4 contacts allowed.

After a highly successful debut in 2018 with just over 1250 logs submitted, the number of logs received in 2019 dropped by 30% to 880. On the outside this looks like a huge loss in participation but after analyzing the data, it appears many operators failed to send in logs. Despite less logs received, the number of total QSOs reported was actual up 7% to 140,636 as compared to 131,181 the previous year. The increase in QSOs can be directly attributed to the addition of FT4 which is twice as fast as FT8.

The statistic that tells the most about participation is the number of different calls claimed minus the number of unique calls claimed. In 2018, that number was 1,885 compared to 1,584 in 2019. This translate to about 16% less participants. It’s hard to pinpoint why the lower activity. Band conditions were not a major factor as both years had similar conditions. We’ll have to see what happens in 2020 to determine which direction the contest is headed.

Dick Van Zandt, K9OM, located on Florida’s Atlantic coast, took first place in the Single Operator category by a wide margin over second place finisher Bob Ruvolo, KI6DY, in Kansas. Dick, running SO2R with a pair of Elecraft K3 transceivers, a 3-element SteppIR yagi, a SteppIR BigIR vertical and an 80M inverted vee with apex at 90′, had 880 QSOs and 108 multipliers for a score of 95,040. 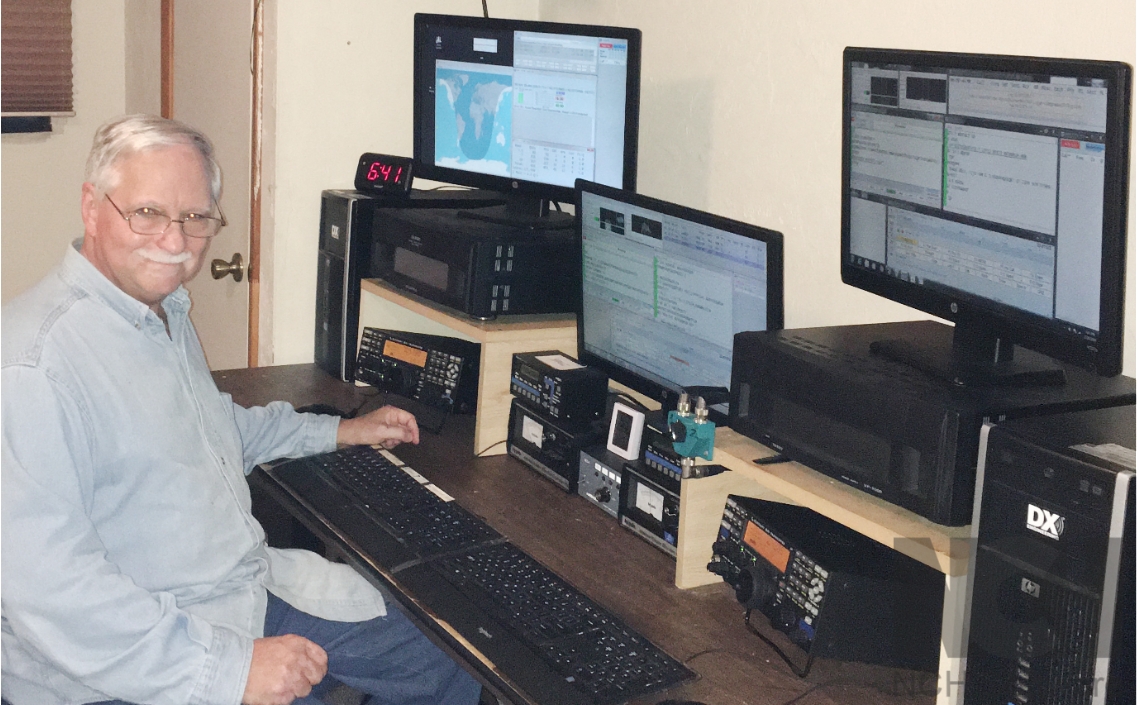 He attributes his success to his proximity to salt water. When asked how conditions were, he said “I thought band conditions in Florida for the FT Roundup were outstanding.  A steady stream of stateside stations all weekend and an amazing number of EU stations were worked.” Dick’s strategy was to work SO2R on FT8 but only use a single radio on FT4. He explains “With FT4 being so fast, and me new at it, I wasn’t sure I could operate SO2R without making dual transmissions at the same time.”

Bob, KI6DY, who moved up to second this year from fourth last year, had 827 QSOs and 95 multipliers for 78,565 points. He ran SO2R on a FlexRadio FLEX-6600M using two slice receivers. His antennas consist of a Force 12 C31-XR at 56′, a Force 12 Delta-II 140 rotatable dipole at 60′ and an 80M inverted vee at 56′.  His strategy was to do mostly S&P. He says “I seem to get stations in the log a lot faster that way. I choose stations that I need in the WSJT-X decode windows, alternating time slots, as fast as I can.” He adds that he doesn’t have to worry about transmitting on both time slots at the same time since the 6600M only has one transmitter. His S&P strategy is something to think about as it seems to work well. 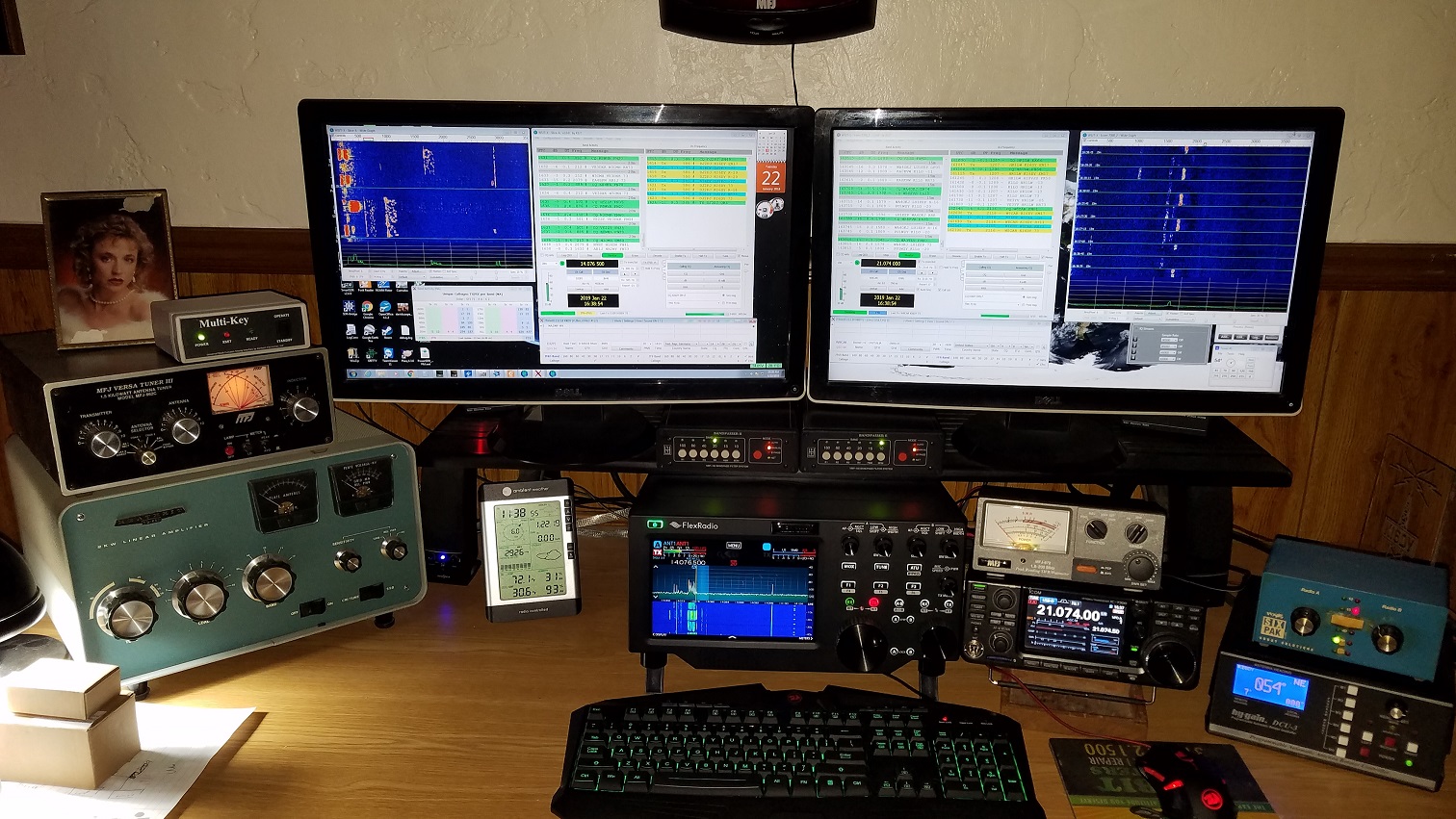 Last year’s winner, Ron Koenig, WV4P, finished third with 723 QSOs, 104 multipliers and scored 75,192 points. That’s 10k points more than he scored last year. Ron runs SO2R with a FLEX-6600. All his equipment is rack-mounted away from the operating position and everything is controlled via computer. 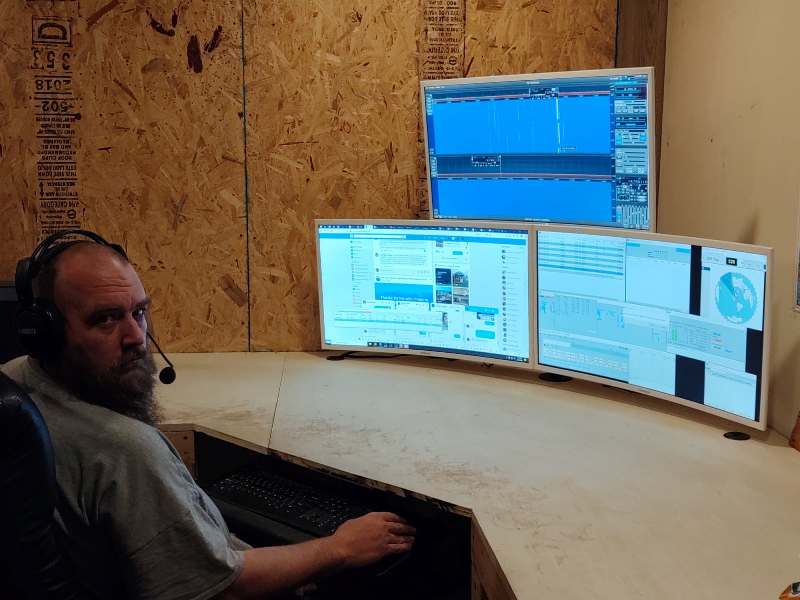 Steve Ruman, KC8YDS, moved up from 16th last year to finish fourth from Ohio this year. Levi Jefferies, K6JO, finished fifth operating as K8O from California. It’s noteworthy that Jan Palecek, OK1NP, who finished sixth, was the only station outside the United States in the top ten. That’s quite a nice accomplishment for a contest that could be considered “domestic” in North America.

Despite only 11 entries in the Multi-op category, the competition was fierce at the top. S51A (Andreja S56B, Sergej S51TC, and Tone S51TC) won the Multi-operator category. They edged out WT0DX (Bill WT0DX and Paul NO0T) by only 1,496 points. The Slovenians had only two QSOs and two multipliers more than the team from Colorado.

Said Tone “We worked from S53APR radioclub with contest call S51A. We used 3 x Kenwood TS 590 as Run, Inband and Multi station. Multi station we used only for checking for new multipliers on other bands. We had very bad propagation on higher bands 0 QSOs on 15m and 10m, but on lower bands was a lot of fun.” Tone and Andreja were the 2018 Multi-op winners using S51TC last year. 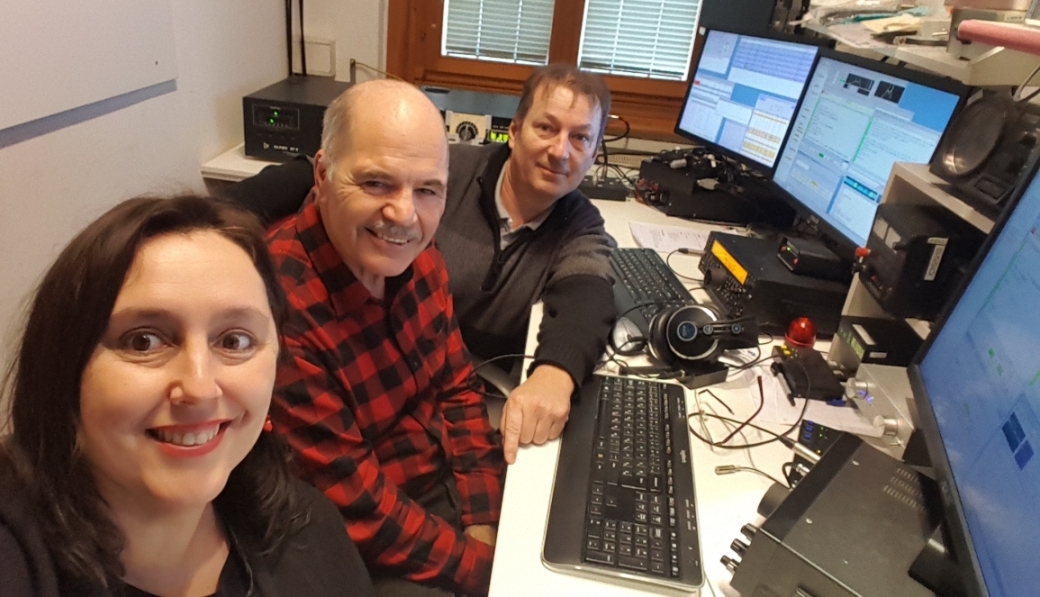 The WT0DX operation was remote with the station located in the western suburbs of Denver. Bill, WT0DX, operated from his vacation condo in Sand Key, Florida while Paul, NO0T, operated from his condo in downtown Denver. Bill says “We took advantage of the two hour time difference when picking our operating times. This also meant no meal conflicts and made the sleep schedules reasonable.” Sounds like these guys have this remote operating down pat. 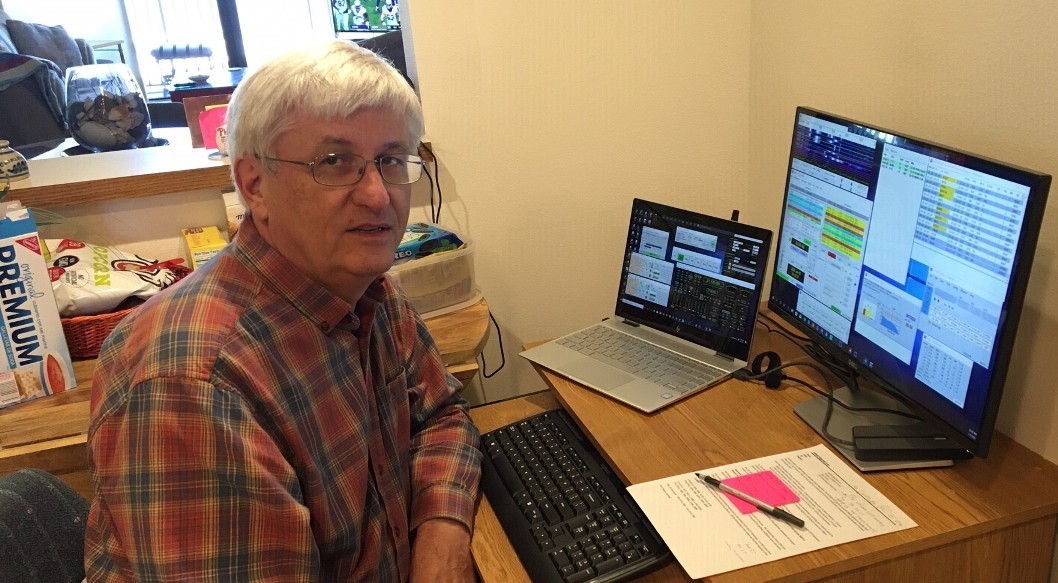 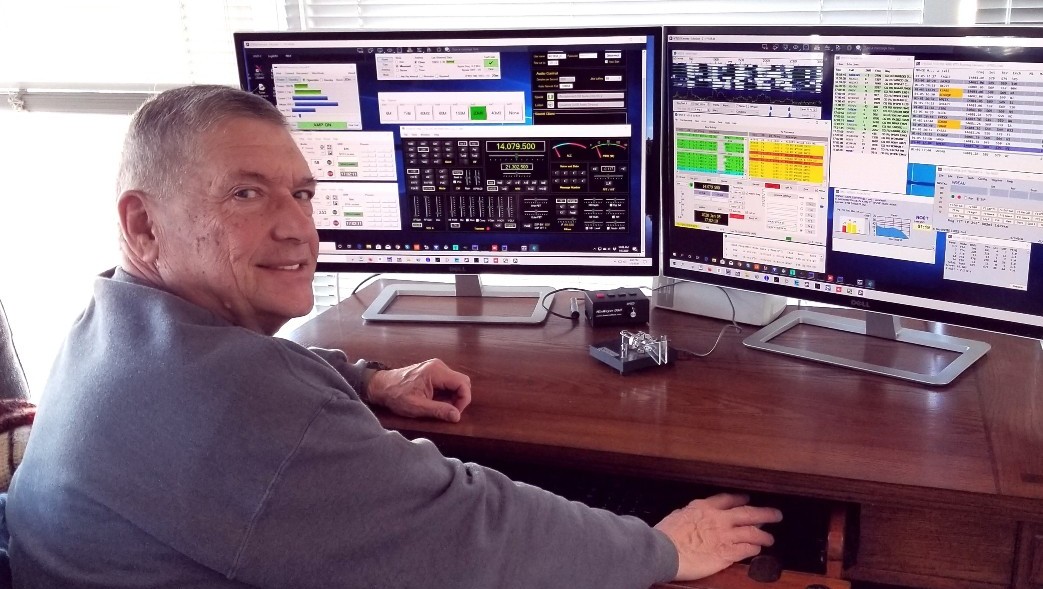 Finishing third in Multi-op was W4MLB (Don AF4Z, Orrin WO4D, Elizabeth KE0NRY, Walter WB5ZGA, Ed KK4ZWC and Mark K2MRK) in Florida. They are all members of the Platinum Coast Amateur Radio Society (PCARS). The group tried to operate the WW Digi DX Contest in August 2019, but was forced to cancel due to a hurricane. Says Walter Aucoin, WB5ZGA, president of the PCARS “So, for the December contest, we organized a small group of contesters and did our research ahead of the contest, so we could operate during the contest without having to lose time figuring out things.” The planning appears to have paid off for them.

Finishing fourth was WW4LL (Fred, WW4LL and Mike, NN9DD). Fred and Mike operated the former W5WMU station in Louisiana remotely. Fred noted the amount of DX available on 40 meters “I had a surprising run to Asia that started at 5:00 am and lasted until about 10:00 am Central.  Worked JAs, YBs, BYs, etc. which was the highlight of the contest for me.”

The NIL rate (Not In Log) has been running 5+% in FT contests.  This compares unfavorably to the classic modes where contest NIL rates are in the 1-2% range.  FT is higher due to higher ambiguity about whether a QSO is complete and should be logged.  The problem is worsened because most FT software decides when to log a QSO and the operator may not take action to override the logging, or vice versa, manually log a probable good QSO when the software does not.  More information and operating suggestions are being developed for dissemination.

This year, the highest one-hour QSO rate for all stations was 71. This was achieved by three different single operators – Steve Franke K9AN, Bob Ruvolo KI6DY, and Steve Goldsmith W1HS. All three stations were operating FT4 at the time.

Ruvolo and Goldsmith were both SO2R while Franke (co-creator of the FT modes along with Joe Taylor, K1JT) was running a single radio. Said Franke “I used one radio (SO1R), an IC-7610, running between 50W and 60W out. My antennas are nothing special: a rotating dipole at 60’ on 40/20/15 and a sloping quarter-wave monopole on 80m.” This goes to show that you can achieve high rates on FT4 without SO2R and big antennas.

Although it appears that FT4 worked well for most in the contest, there’s always room for improvement. Franke went on to say “I ran the whole contest with “Save All” turned on, and since the contest I’ve been using the saved files to improve the FT4 decoder.  Some of those improvements should show up in the next release of WSJT-X.” That’s great news. We are certainly looking forward to using a new and improved FT4 in the next FT Roundup. See you on December 5th & 6th, 2020.