When using a sound card modem such as 2Tone, MMTTY or WinRTTY, there are some considerations that need to be made. For one, a USB-to-serial adapter is not likely to be capable of generated 5-bit Baudot (RTTY) at a baud rate of 75 baud when transmitting FSK EXCEPT with perhaps some Edgeport models OR when using MMTTY’s EXTFSK64. 75 baud RTTY can be achieved using EXTFSK64 as long as your computer’s processor (CPU) will handle the load. Be sure to read additional information on EXTFSK64 here. (Note: There are no limitations to running 75 baud AFSK with WriteLog.) Normally when using a USB-to-serial adapter for FSK, you are forced to use either Software Generated FSK or MMTTY EXTFSK which are limited to 45 baud. This is shown when you activate Software generated FSK from the Port menu in Rttyrite. 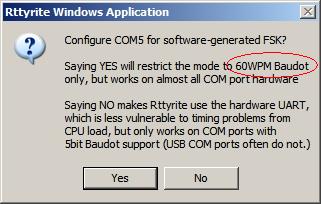 For FSK users that do not rely on Software generated FSK or MMTTY EXTFSK, baud rates other than 45 baud can be achieved. If you use a microHAM interface, detailed instructions on setting up your device with WriteLog can be found on the support page on the microHAM USA website at http://microham-usa.com/store/cmspage.php?page_id=11. If you use a legacy COM port (one built into the motherboard of a computer, or installed in a PCI or PCI-X slot of a desktop PC, or a PCMCIA serial card in a laptop computer) for generating FSK with a sound card modem such as 2Tone, MMTTY or WinRTTY, the information below will show how to set up for 75 baud RTTY. 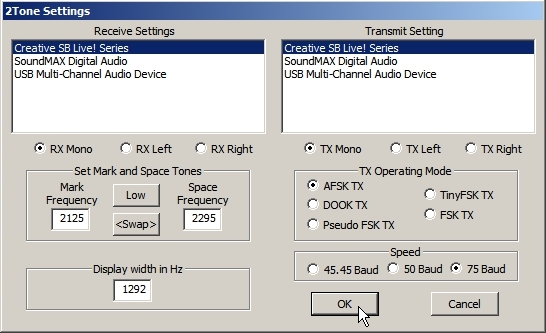 If you are running AFSK, there is nothing else that needs to be set. If you are running FSK, go to the Rttyrite Mode menu and select 75 baud (100 WPM) Baudot. You are now set for 75 baud RTTY both transmit and receive. (Note: You must use Hardware Generated FSK in the Port menu). For additional information on setting up FSK with 2Tone, see Setting up FSK in Rttyrite for 2Tone. 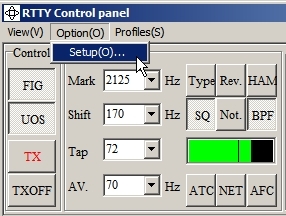 If you are running MMTTY version 1.68A or later, in Setup, go to the Demodulator tab screen and un-check Fixes 45.45 baud as shown below.  (Note: If you are running an earlier version of MMTTY, it is highly recommended you download and install version 1.68A or later from the MMTTY page on the MM Hamsoft web site.) MMTTY versions earlier than 1.68A do not have the Fixes 45.45 baud check box. 75 baud can still be achieved; just skip this step. 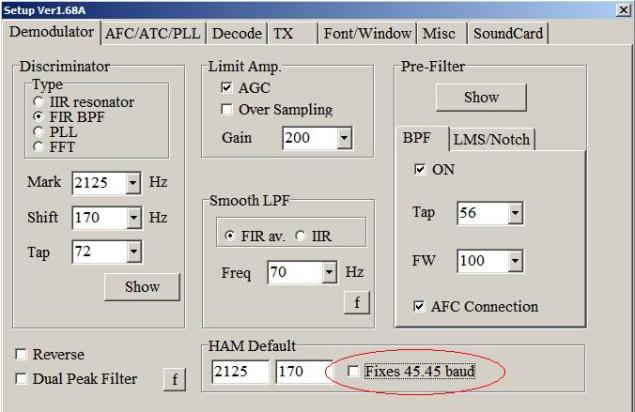 Go to the Decode tab and use the BaudRate pull-down menu to select 75, then click OK.  Once you select 75 and click OK, you will then be set to send and receive 75 baud using either AFSK or FSK.  If for some reason this doesn’t work, close the MMTTY window and reopen it and you should be set to 75 baud.  Or change the TU type in Rttyrite to Dumb Terminal Unit and then go back to MMTTY and that should also set you to 75 baud (thanks Joe W4TV). For more information setting up MMTTY for FSK see either Setting up FSK in Rttyrite for the MMTTY Plug-in or Setting up FSK in Rttyrite for MMTTY via XMMT.ocx. 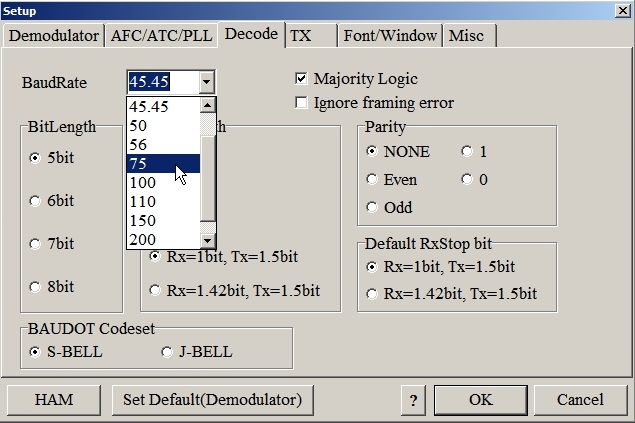 To run 75 baud RTTY with WinRTTY running in the Rttyrite window, using either AFSK or FSK, simply change the Mode menu selection to 75 baud (100 WPM) Baudot.