Clone window are set up the same as the main Rttyrite window as far as TU Type is concerned. If you want to use the combination of 2Tone & MMTTY, then you choose one in the main Rttyrite window and the other in the Clone window. Since Clone windows are receive-only, you only need to set the TU type and nothing else. You don’t have to be limited to MMTTY in one window and 2Tone in another. You can run more than one instance of 2Tone or MMTTY. For instance, you can have two windows running MMTTY and/or two windows running 2Tone. If you have an external TNC such as a HAL DXP-38, you can even have a Clone window for that. (NOTE: If you run an external TNC in additional to a sound card modem like MMTTY or 2Tone, you will need to split the audio from your receiver and feed both the TNC and the sound card. Be sure to use 1:1 isolation transformers to eliminate possible ground loops. One solution is to use a Radio Shack ground loop isolator. Ground loop isolators can also be found on eBay. If you prefer building your own, the Bourns LM-NP-1001-B1L transformer is an excellent choice and has 30db better IMD (Intermodulation Distortion) characteristics than the Radio Shack unit although IMD is not critical when it comes to receive audio.)

There are special considerations when running multiple instances of either 2Tone or MMTTY. It is advised that when you run more than one instance of a software modem (2Tone or MMTTY), that you run them from different directories on your hard drive. When MMTTY is first installed on your PC, it is installed in a directory named MMTTY. This subdirectory may be under the root directory with a path of C:\MMTTY or it could be in your Program Files directory at C:\Program Files\MMTTY. (Note: New installations of MMTTY are placed in C:\MMTTY. This is the recommended location for MMTTY on your hard drive.) To use multiple instances of MMTTY, you can copy all the files from the main MMTTY directory into into newly created directories. New directories should have different names to set them apart, such as MMTTY1, MMTTY2, etc.

Likewise, if you plan on running more than one instance of 2Tone, you should create directories on your hard drive such as C:\2Tone, C:\2Tone1, etc and copy 2Tone files 2Tone.exe and 2Tone.ini into each directory. Another approach to naming 2Tone directories is to name them after their version number. In the example below, there are four different versions of 2Tone installed on this PC. There are two folders for each version. This allows each version to be run in two separate Rttyrite windows at the same time. 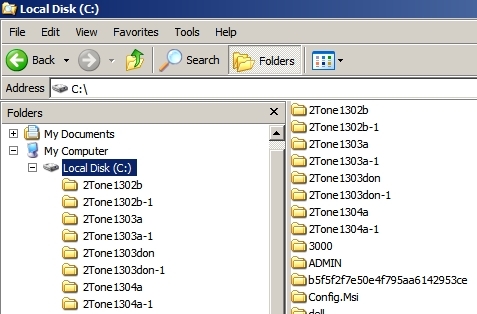 The biggest issue in running multiple Clone windows is figuring out where to put them. Remember that each Clone window for 2Tone or MMTTY will have a tuning indicator window as well. Since you really only need one tuning window showing on the screen, you can hide the others behind other windows or stack them on top of each other as an option. If you have room on your screen, you can certainly leave them showing. If you decide to hide the tuning indicators, you probably want to leave the tuning indicator for the main Rttyrite window visible, especially it is for MMTTY so you can have access to the the buttons on the front panel such as AFC. Below is an example of one main Rttyrite window with three clone window – two for MMTTY and two for 2Tone.

If you set up one or more Clone windows, they will not automatically reappear automatically the next time you start Rttyrite unless you add the NumClonesAtStartup=n command into the [Rttyrite] section of the writelog.ini file. The letter “n” at the end of the command is the number clones you want to start when Rttyrite is started. If you run SO2R with two Entry Windows and Clone windows off a second main Rttyrite window, you will also need to include this command in the [Rttyrite2] section of writelog.ini.