The exchange for the NAQP RTTY Contest is NAME and STATE only. RST is not part of the exchange. 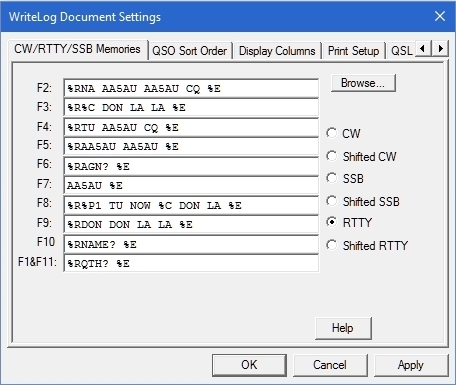 F2 – CQ Message.  Always put “CQ” at the end of the message followed by a space.

F3 – This is the report message you send when you are running (CQing).  It includes ONLY your name and state. Do NOT include RST. RST is not required as part of the exchange and is a waste of time. I only send my name once because I figure that nearly everyone knows me by now. You can send your name twice if you like, especially if you use a “special” name.

F4 – Standard Confirmation Message when running.  Always send “TU” as the first thing in your confirmation message so the other stations knows right away you got his report OK. For NAQP, I sometimes send other confirmation messages which are included in Shift+F2 & Shift+F4. These are shown in the Shifted Messages section, farther down on this page.

F7 – Your callsign once.  Note this is a message that does not start with %R. This message is appended (chained) to other messages for clarity if you believe the other station does not have your call correctly.  It can be chained with F3, F5, F6, F8 or F9 by hitting F3 then F7.

F8 – This is a special message to use when you receive more than one callsign on your screen while running.  If you decode two (or more) callsigns, you work the first station and log him, then enter the callsign of the second station into the Entry Window either by clicking on it in Rttyrite or typing it is manually, then hit F8. This message confirms the contact with the first station and sends a report to the second station. %P1 represents the callsign of the station you just logged. So if you work W1ZT, log him and then put K4GMH in the call field, pressing F8 sends W1ZT TU NOW K4GMH DON LA.

F10 – Sent to request the other station repeat their name.

F11 – Sent to request the other station repeat their State. I use QTH because it is shorter than STATE, but you can use STATE if you like. 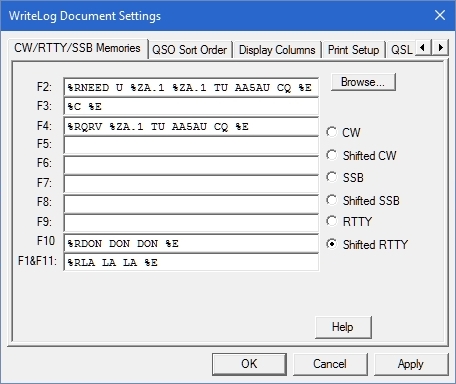 I use only 5 shifted message which means there are plenty of spare slots for additional messages. I also have programmed F1 to send the Shift+F3 message using Keyboard Shortucts. For information on how to do this, go here.

Shift+F2 – Alternate confirmation message used only when operating SO2R on two separate computers. This is plea to try to get the station you just worked to move to the frequency of your other radio. Because multipliers count per band, moving multiplier stations to other bands helps your score tremendously. %ZA.1 is the frequency of the A radio on the other computer. The .1 allows the frequency to be shown with a decimal such as 14085.0 instead of 14085. The report on the other computer would contain %ZB.1.

Shift+F3 – This sends only the other station’s callsign.  This is mainly useful when you have several stations answering your CQ and there may be others still calling when you come back to someone with a report.  If the station you are sending a report to does not see their callsign because of QRM, putting their call at the end allows them to know for sure the report is for them.  It comes out like:  W1ZT 599 001 001 W1ZT  This message is usually chained with the F3 message. I put this message as Shift+F3 so it is on the same F3 as a regular report and easy to remember.  To use it with F3, press F3 then press Shift+F3.

Copy & paste these messages directly into WriteLog. Replace YOURCALL with your callsign. Use %1 in place of %3 if you want.