There were only 731 logs submitted in the 2022 FT Roundup. This is the lowest of any year of the contest which started in 2018. It was surprising to see dismal numbers since band conditions were the best of any of the previous contest years. The solar flux index (SFI) was 124, the A index was 16 and the K was 1 at the start on the contest. The SFI rose 20 points during the contest.

Despite lower participation, there was fierce competition in the single operator category where the top three competitors were within 4400 points of each other. In the end, Victor, N8OO, operating from Louisiana, edged out Tyler, K3MM, in Maryland and Ron, WV4P, in Tennessee. This was Victor’s second single operator win. He also won in 2020. Victor had 1411 QSOs, 98 multipliers and a total score of 135,240 points. Tyler ended up with 1337 QSOs, 101 multipliers and 132,310 points. Ron finished with 1307 QSOs, 102 multipliers and 130,866.

After the contest, Victor had this to say “Real good contest, some kind of surprise about the pile up.” Because of the way scoring is in this contest, with each QSO worth one point each and multipliers counting only once (not once per band), Victor’s higher QSO total is what made the difference.

The Top Ten single operator positions were all from the United States. This is the first time this has happened. The current rules of the contest are based on the ARRL RTTY Roundup. This makes the contest more of a domestic competition for US and Canadians operators. Half of all logs submitted this year were from North America. 44 of the lower 48 states were represented as well as Washington DC. Five Canadian provinces were also active. On the DX side, not including the United States or Canada, there were logs from only 50 DX entities. 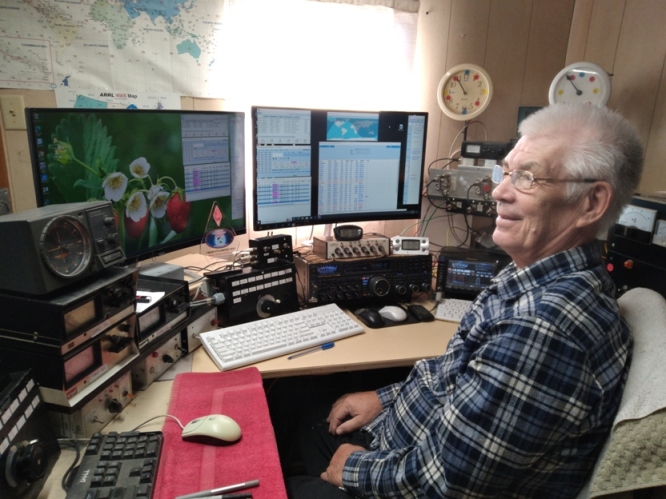 We are considering changes to the FT Roundup Rules, starting in 2023.  The objectives are increased participation, more worldwide and QSO compatibility with non-contesters. Your comments will be very helpful in our final decision.

The FT Roundup was initiated when it could serve as a warm-up to the ARRL RTTY Roundup a month later.  Also, there has been frustration for all FT operators, contest and non-contest, when a FT contest is underway, due to the different message protocols.

Accordingly, we are thinking of changing the exchange and scoring as follows:

All other rules would remain the same.  One caveat is that QSO partners who respond to a CQ with Tx2 won’t be providing their Grid to the contester.  This can be dealt with by contesters either:

We need to confirm with logging software authors that they can accommodate these, or other, changes and still produce a proper Cabrillo format log file for submittal.

We appreciate any comments, but realize that the changes above are just ideas at this point and not a commitment.  We may ultimately decide to make no changes or different changes.

We don’t believe FT contesting is in a decline. That’s evident by the record number of participants in the WW Digi Contest last August. Let us know what you think. We look forward to hearing from you and see you next year!