The North America RTTY Sprint is a unique contest which requires unique messages unlike any other contest. The exchange for the NA RTTY Sprint is Serial Number, NAME and Location (state, province or country). RST is not part of the exchange and should not be sent.

The rules specifically state: “To have a valid exchange, you must send all of the following information: The other station’s call sign, your call sign, your serial number, your name and your location (state, province or country).” Here is an example of a valid contact in the NA RTTY Sprint:

Because of the special QSY rules (see the rules for specifics on QSY rule), there needs to be a unique way, or convention, to send the exchange depending on whether or not you are the station initiating the contact (calling CQ). The CQ station should always send his exchange message like what is shown in the first line shown in bold print in the example above (AA5AU W0YK 154 ED CA). The station that answers the CQ should always send his exchange as shown in the second line in bold print in the example (W0YK 123 DON LA AA5AU). The reason for this is so that other stations monitoring the frequency will know who will keep the frequency after the contact is over and who will QSY.

The unique orderings of these exchanges is NOT a rule, but rather Sprint convention used over the years. It’s highly recommended everyone use this convention, otherwise confusion can result. In our example, W0YK was the initial CQ station. AA5AU answered him. W0YK, by sending the message AA5AU W0YK 154 ED CA shows that he was the originating station. AA5AU, by sending the report as W0YK 123 DON LA AA5AU tells anyone monitoring the frequency that AA5AU will be the station retaining the frequency after the QSO and W0YK is the station that will QSY.

For more detailed information, read “The Art of RTTY Sprinting” by Ed, W0YK.

For the NA RTTY Sprint, this page shows two different ways of setting up your messages – one by AA5AU and one by W0YK.

For AA5AU: Type messages assigned to typical Fn keys in a way that is efficient for operators who use the Fn keys directly. In this case, it is important to group the most commonly used messages on the primary Fn keys that than Shifted-Fn nkeys.

For W0YK: The main difference to the AA5AU messages is how Ed organizes them among the Fn keys.

The primary Fn messages are used for Run messages and requests for fills. The shifted-Fn messages are used for S&P and responses to fill requests. In addition, Ed maps all of the key Run and S&P messages to keys surrounding the Enter key and seldom uses the Fn keys directly. He also uses ESM (Enter Sends Message) in which the Enter key sends one of three different messages depening on QSO phase (CQ or exchange or TU/CQ). Ed has no messages, other than the main exchange messages, where information is repeated. Instead, he simply taps a given key the number of times we wants it repeated, depending on circumstances. 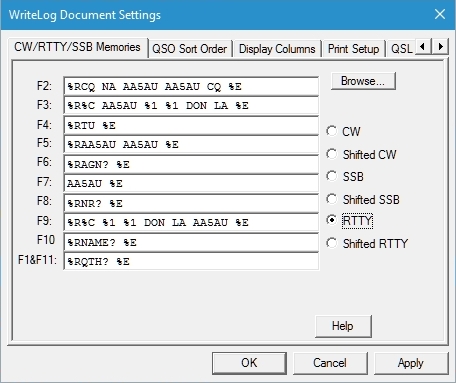 F2 – CQ Message.  Always put “CQ” at the end of the message followed by a space.

F3 – This is the report message you send when you are the station initiating a contact (CQ). It includes Serial number, Name and Location (state, province or country). You can send the serial number 2 or 3 times. I send name and state only once.

F4 – This message is only used when you are the CQ station, to confirm you received the report from the S&P station. You should this message before you QSY.

F7 – Your callsign once.  Note this is a message that does not start with %R. This message is appended (chained) to other messages for clarity if you believe the other station does not have your call correctly.  It can be chained with F3, F5, F6, F8 or F9 by hitting F3 then F7.

F8 – Used to ask for a repeat of the other stations serial number.

F10 – Sent to request the other station repeat their name.

F11 – Sent to request the other station repeat their Location (state, province or country). 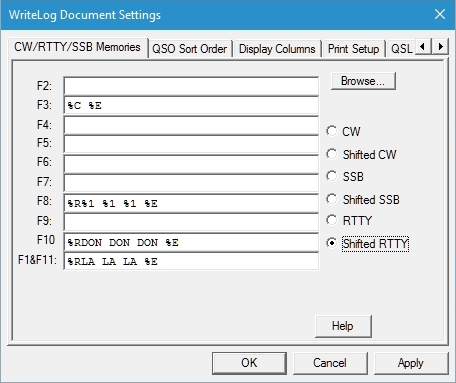 I use only 4 shifted message in the NA RTTY Sprint which means there are plenty of spare slots for additional messages. I also have programmed F1 to send the Shift+F3 message using Keyboard Shortucts. For information on how to do this, go here.

Shift+F3 – This sends only the other station’s callsign if needed.

Shift+F8 – Repeat of your serial number.

Copy & paste AA5AU example messages directly into WriteLog. Replace YOURCALL with your callsign, YOURNAME with your name, and YOURQTH with your location (state, province, country). 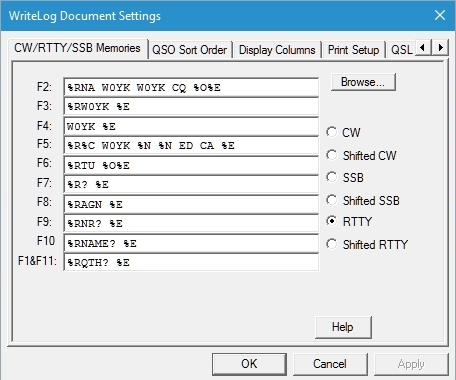 F2 – CQ Message. Notice Ed places %O toward the end of this message. %O automatically clears RIT in radios that use this command.

F3 – Call sign sent once on a new line (message begins with %R). Ed types the key as many times as he wants to send his call.

F4 – Call sign sent once, not on a new line (%R), used to append to other messages, including F3. Ed types the key as many times as he wants to send his call.

F5 – Run exchange message. Used when calling CQ. Notice Ed uses %N instead of %1. This is acceptable as %N does the same thing as %1 in RTTY mode.

F6 – Confirmation message used to confirm the exchange from an S&P station. Used prior to QSYing from your CQ frequency. Again, %O used to clear the RIT.

F7 – Ed uses ? to request a repeat of the entire message.

F8 – Ed uses AGN if he things the other station may not understand the single ?. And, when he wants to take the time to be really clear, he changes the two together: AGN?

F9 – Used to ask for a repeat of the other station’s number.

F10 – Used to ask for a repeat of the other station’s name.

F11 – Used to ask for a repeat of the other station’s location (state, province, country) 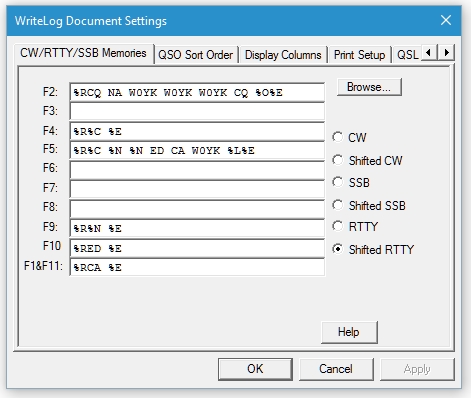 Ed uses only 6 shifted messages in the NA RTTY Sprint which means there are plenty of spare slots for additional messages.

Shift+F4 – This sends only the other station’s callsign if needed.

Copy & paste W0YK example messages directly into WriteLog. Replace YOURCALL with your callsign, YOURNAME with your name, and YOURQTH with your location (state, province, country).