The exchange in the ARRL RTTY Roundup is RST & state for US stations, RST & Canadian area for Canadian stations. DX Stations, including Alaska and Hawaii, send RST & serial number starting at 001.  For DX stations, use %3 to to send the required 3 digital serial number. (Note: DX stations can use %1 instead of %3 which sends number 1 instead of 001.)

F2 – CQ Message.  It is short and to the point.  The first “CQ” in the message can be replaced with something like “RU” if you like. Always put the “CQ” at the end of the message followed by a space.

F3 – This is the report message you send when you are running (CQing).  It includes the other station’s callsign, signal report, and your State (or Number %3 if DX) sent twice. Always only send RST once.

F4 – Confirmation when running.  Always send “TU” as the first thing in your confirmation message so the other stations knows right away you got his report OK.

F7 – Your callsign once.  Note this is a message that does not start with %R. This message is appended to other messages for clarity if you believe the other station does not have your call correctly. It can be chained with F3, F5, F6, F8 or F9 by hitting F3 then F7.

F8 – This is a special message to use when you receive more than one callsign on your screen while running.  If you decode two (or more) callsigns, you work the first station and log him, then enter the callsign of the second station into the Entry Window either by clicking on it in Rttyrite or typing it is manually, then hit F8. This message confirms the contact with the first station and send a report to the second station. If you want to send the callsign of the station you logged first, insert %P1 immediately after %R in the message  %RTU %P1 NOW %C 599 LA %E. So if you work W1ZT first and log him, then put K4GMH in the Entry Window, and hit F8, the message will send:   TU W1ZT NOW K4GMH 599 LA. %P1 represents the callsign of the station you just logged.

F11 – Used to send a repeat of your State when requested. This can be extended to sending the state abbreviation 3 times instead of 2.

I use only 3 shifted messages which means there are plenty of spare slots for additional messages. 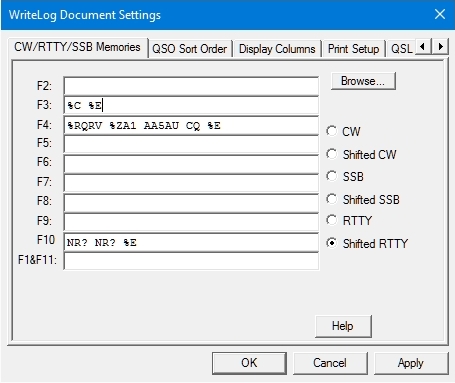 Shift+F3 – This sends only the other station’s callsign.  This is mainly useful when you have several stations answering your CQ and there may be others still calling when you come back to someone with a report.  If the station you are sending a report to does not see their callsign because of QRM, putting their call at the end allows them to know for sure the report is for them.  It comes out like:  W1ZT 599 LA LA W1ZT  This message is usually chained with the F3 message. I put this message as Shift+F3 so it is on the same F3 as a regular report and easy to remember.  To use it with F3, press F3 then press Shift+F3.

Shift+F4 – This is a special message used only for SO2R operation. This message is sent in place of F4 when you want to move someone to the frequency of your second radio or to let them know where you are on another band. It comes out like: QRV 21085.0 AA5AU CQ. It implies you want the other station to QSY so you can work them on your second radio on another band. This message is not very useful in the ARRL RTTY Roundup since multipliers only count once and not once per band. There is not a huge advantage to moving stations to other bands in the ARRL RTTY Roundup so this message is rarely used. I use it mainly in slow times on 40 and 80 meters. When I work a stations on one of those bands that I have not worked on the other band, I may send this message to try to generate more rate.

Read the help file on the %Z character to determine how to set it up for your SO2R setup.

Shift+F10 – Used to ask for a repeat of a DX station’s serial number.

Copy & paste these messages directly into WriteLog. Replace YOURCALL with your callsign. Replace LA is your state, province/territory or %3 for DX stations including Alaska and Hawaii.

GL and CU in the ARRL RTTY Roundup!