Operating Remotely in the 2014 Ten-Meter RTTY Contest by Mark, K6UFO

I have participated in the Ten Meter RTTY Contest every year, and the last three years I have seriously tried to win the Multi-op category from W6YX with my friend and superb operator Tom, ND2T. The single-op category has usually gone to a DXpedition or DX operator near Europe such as EA8 or CT3, so I have entered as Multi-op in order to “share the fun” and have a chance of winning from California. We had our highest score from California in 2013 with 340 QSOs x 72 Multipliers (States and DXCC countries) for 24,408. We were beaten by a Multi-op on the East Coast who made 371 Q x 87 M for 31,929. I could scheme ways to increase the QSOs, but they worked 49 DXCC Countries to our mere 25! Without access to the numerous European countries I couldn’t figure out a way to win.

While reviewing the past scores I also noticed that no station had ever entered the Multi-op category from Oceania. Any entry had a good chance of winning Oceania Multi-op and immediately setting the Oceania Multi-op Record!

I had been trying remote operating for almost 10 years, but just in the last two years it has reached a level of “contest-ready” capability, with the most recent breakthroughs being the RemoteRig units and the Elecraft “Twin” concept, where a K3 control panel controls the remote radio as if you were siiting at the radio. The other essential station controls for rotators, etc can be controlled through the RemoteHamRadio.com service.

I had used a remote station in Hawaii for JARTS RTTY and CQ WW SSB (setting the Oceania record for SOSB(A)/20 QRP). My plan was to use the Hawaii station again for Ten Meter RTTY and capture the Oceania Multi-op Record. My Multi-op partner Tom liked the idea, and email with the contest sponsor confirmed it was within the rules to operate remote from California to Hawaii, so long as all transmitters, receivers and antennas were at Hawaii. This plan hit a snag when the radio at the Hawaii station went back to Elecraft for repairs, it wasn’t clear if it would arrive back in time for the Ten Meter RTTY contest, and the station owner wanted to keep the station offline to prepare for the upcoming W1AW/KH6 activity.

Well, if we couldn’t remote to Hawaii, how about remote to a station that would let us access the European countries we needed to win? Considering some of the available remote stations, we setup for one in Calais, Maine – as close to Europe as we could get and still be in the USA. I setup my K3/0-Mini control head and RemoteRig unit on a table in my San Francisco condo (no antennas), added a laptop with RTTY and logging software, and we were ready to go. 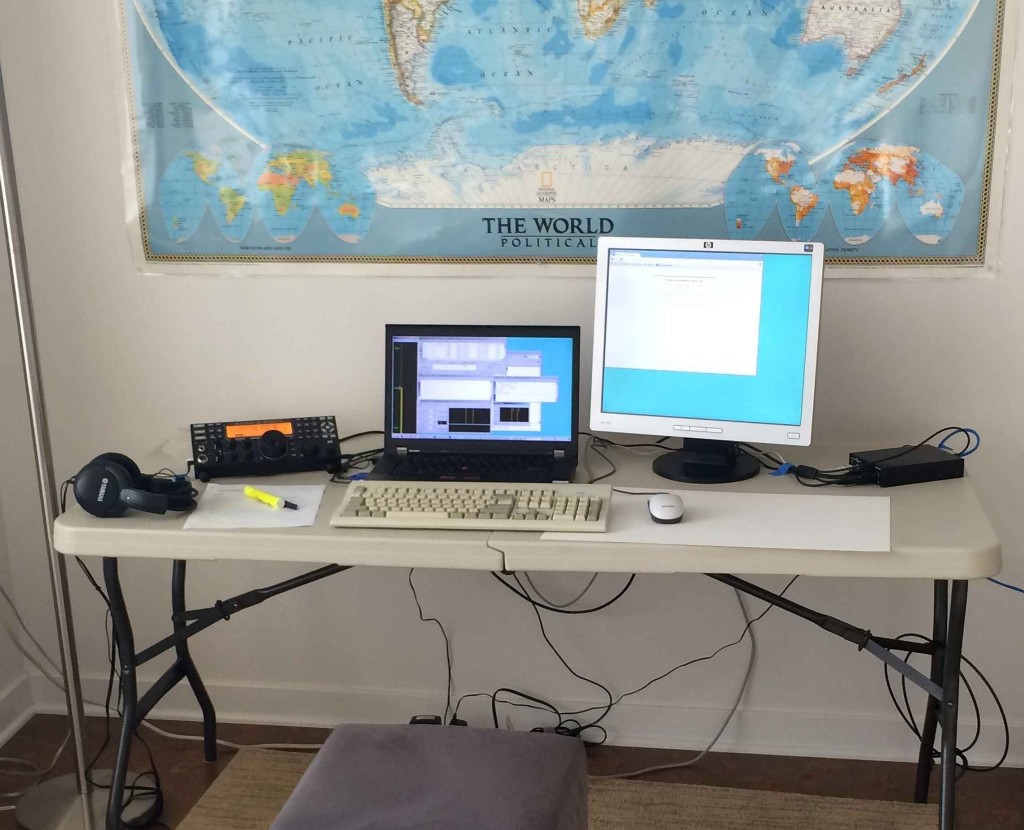 Operating a 10 meter contest from Maine and trying to work Europeans means you start at sunrise in Maine, which was 4AM local time in San Francisco. But as the Europeans rolled into the log I decided it was worth it. My first three contacts were Z36W, R7AB, and UT2G. More Europeans than a whole day’s effort from California! 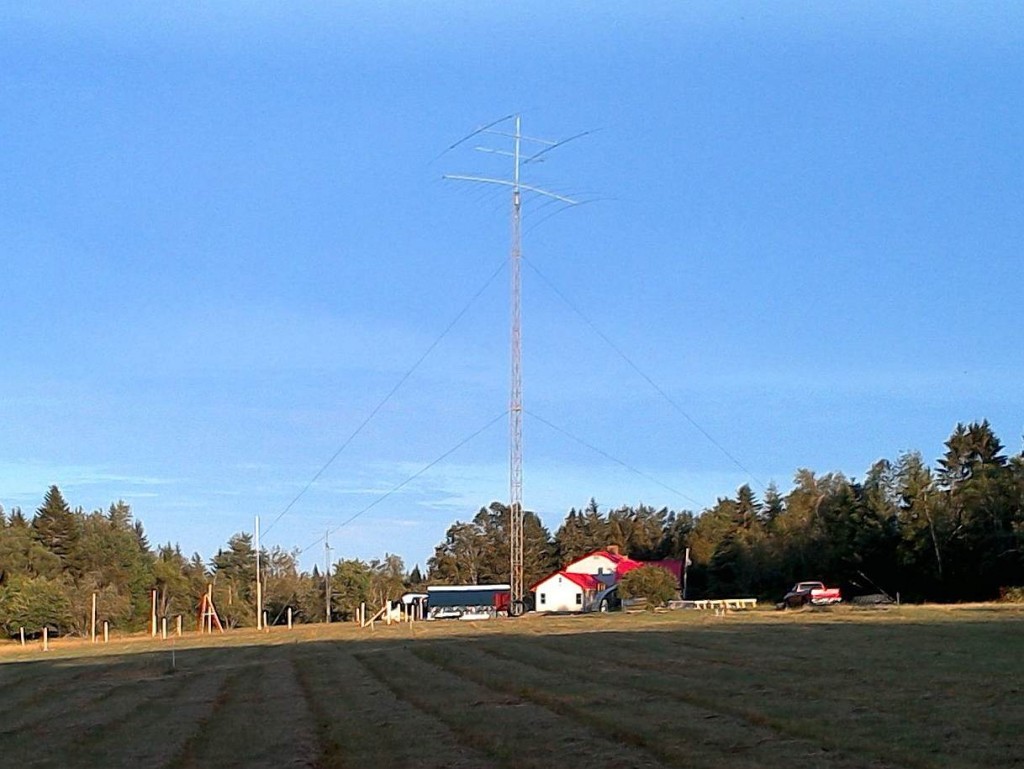 Tom ND2T arrived in a couple hours to take over, and found the remote system to work surprisingly well. The delays are small, but tolerable, the audio is less than perfect, but good enough for the dual RTTY decoders (MMTTY and 2Tone). After European sunset we rotated back toward the USA and ran up state multipliers.

I had received an email telling me the Hawaii station was back in operation. As the sun set in Maine, but still two hours to go in the contest, we decided to ALSO meet our original goal of an Oceania Multi-op entry from Hawaii. I showed Tom how easy it was to reconfigure the settings for another remote station, and we operated the last two hours from as far west as we could get in the USA. To meet the contest rules, this had to be under a different callsign, but it was great to be “fresh meat” in the contest. We had a non-stop two hour run on one frequency 28.082 RTTY. 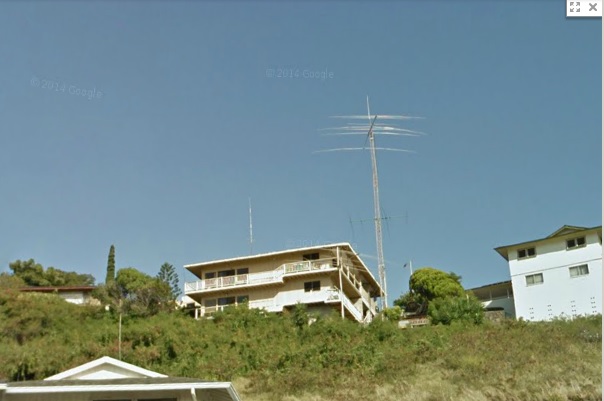 It was a load of fun to QSY 5200 miles sunward in less than five minutes and to experience the same band and the same contest from two very different geographies. Maine is at Europe’s door; everything is DX from Hawaii.

In the end, we surpassed our Multi-op goals from Maine, but still came in 3rd Place behind IT9/LY5W and C37NL who remain closer to the European multipliers. We also met our goal for an Oceania Multi-op entry and Record! Operating remote was technically interesting. Having a second callsign in the far west for the last two hours was refreshing, and we supported the contest with another callsign and potential Multiplier for many entrants.

Will we go remote again? Are there still improvements to be made? See you next year!