As previously mentioned, Radio Control gives you many nice features when used with WriteLog.  Some may consider these “Bells & Whistles”.  I actually think of them as standard necessary features for RTTY contesting.

Type the frequency in kHz in the Call field and hit Enter.

The Band Map is one of the most important features you can use with WriteLog when you have Radio Control.  The Band Map can be used with or without the use of a Packetcluster connection.  For single ops, use of the Packetcluster is forbidden in many contests yet it does not lower the importance of the Band Map.  The Band Map window is activated from the “Window” menu in the main WriteLog screen and this is what it looks like. 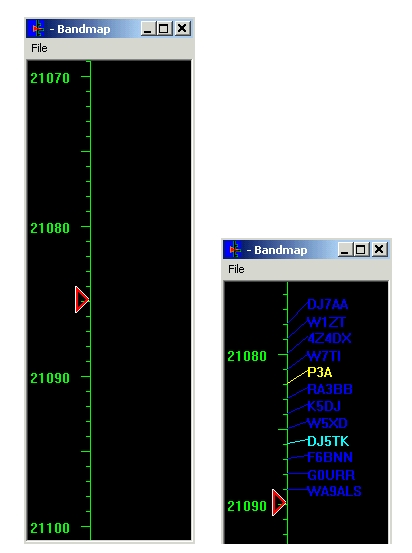 The Band Map is basically a vertical radio dial.  It’s set vertically so the callsigns “mapped” will show up horizontally and can be easily identified.  As you turn the VFO knob on your radio, you will see the dial move up or down depending on which way the VFO is adjusted.  The red pointer represents the frequency the radio is presently on.

Even when you are not connected to a Packetcluster, the Band Map is a powerful tool.  You can map stations you work or hear onto the Band Map.  This is especially useful in the Search & Pounce mode of operation.  When you log a station, it is mapped automatically to the Band Map on the frequency worked.  So as you move up or down the band working stations, all stations worked become mapped so that if you make another pass through the band you can quickly skip over stations you’ve already worked and look in between previously worked stations for new stations.  It’s a great time-saving feature.

The amount of time a station remains showing on the Band Map is determined by the “DefaultTimeoutSeconds” entry in the [BandMap] section of Writelog.ini file.  The actual default entry is:

The Band Map window size is adjustable and has many options that will be covered later.  Above right is an example of what the Band Map might look like after a pass through the band.  The stations in dark blue are stations that were worked and logged or stations that were dupes and entered into the Band Map manually.  P3A is a new multiplier (in yellow) that was passed over perhaps because the pileup was too big so the call was mapped manually in case the operator wanted to go back to him later.  DJ5TK was not worked, not a new multiplier and placed on the Band Map manually.

Eventually as you move up the band you may want to go back and try to break the pileup on P3A again.  To get back to the P3A frequency all you have to do is double-click on the callsign in the Band Map with the mouse and the radio VFO will be brought back to P3A’s frequency automatically. Sweet!

An important part of using the Band Map effectively is mapping stations to the Band Map manually.  There are several ways to do this.  In order to map a station to the Band Map, the callsign must be in the Entry Window.

The simplest way to manually place a callsign on the Band Map manually is to set up to use the “MapCallOnSpace” option by placing the following line in the Writelog.ini file under the [Entry] Section: 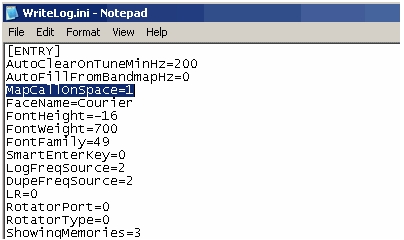 When MapCallOnSpace is activated, a callsign in the CALL field of the Entry Window will automatically be placed on the Band Map when you hit the space bar.

Likewise, right clicking inside the Rttyrite window produces another pop-up window where “Add to Band Map” can be selected.

You can map stations to the Band Map using the File menu option “Add Station…” from the Bandmap window, but I’ve never used this option.  It seems too time consuming.

Another Easy Way to Map to the Band Map – %B

%B when used in a message buffer will map a station to the Band Map.  Remember those special message buffer buttons located just above the Entry Window shown on Page 10?  The “Call” button just above the callsign field is an excellent place to program a special %B buffer.  When a buffer is activated that contains %B, the call in the Entry Window is placed in the Bandmap automatically.  If you have a buffer containing only %B, the transmitter is not keyed but the call is still put in the Band Map.  Since the addition of “MapCallOnSpace ” in 2004, I no longer have an F-key buffer message containing only %B.  However, I still program the “CALL” button in the Entry Window with %B.

The “CALL” buffer button just above the callsign field is kind of in a bad spot, which makes it perfect for %B.  Many times when the keyboard focus is taken away from the Entry Window, you have to click your mouse back into the Entry Window to return the cursor there.  And a lot of times when you click into Entry Window you will invariably, accidentally click the “Call” button.  If you have nothing programmed into the “CALL” button, then nothing happens.  But if you have a regular message-type buffer set up such as %R %C DE AA5AU AA5AU K%E, then that message is transmitted.  This, of course, is undesirable.  However, if you have only %B programmed into that special buffer button, clicking the button does only one thing – map the call in the Entry Window onto the Band Map.  I use %B in the Call button buffer in each and every contest except the NA Sprint (the Bandmap is useless in the NA Sprint because of the QSY rule).

Remember, to program one of the button message buffers, hold down the Shift key and left-click the button.

Most of the time you will want to manually map a callsign when you’ve come across a dupe while in S&P contesting mode and want to put the call on the Band Map so that next time you come onto that frequency you will already know who’s there and you don’t have to stop to find out who it is.

You should practice mapping stations to the Band Map manually with any of the available methods.  Mastering callsign mapping helps you move up or down the band quickly when S&P.

You will want to use the Band Map in every contest, so you should organize your screen to show the main WriteLog window, the Rttyrite window and the Band Map window, then Save your Configuration so they start up automatically in the same location the next time you start WriteLog.  If you use the MMTTY plug-in, you will need room for the RTTY Control panel as well.  Click here for an example of how you might arrange your screen to show all these windows.  This is just a basic screen layout.  Another example will be shown later after adding other windows. Arrange your screen the way you want it, then go to the Setup menu in the main WriteLog window and do a Save Configuration. Check both the Band Map and RTTY check boxes.