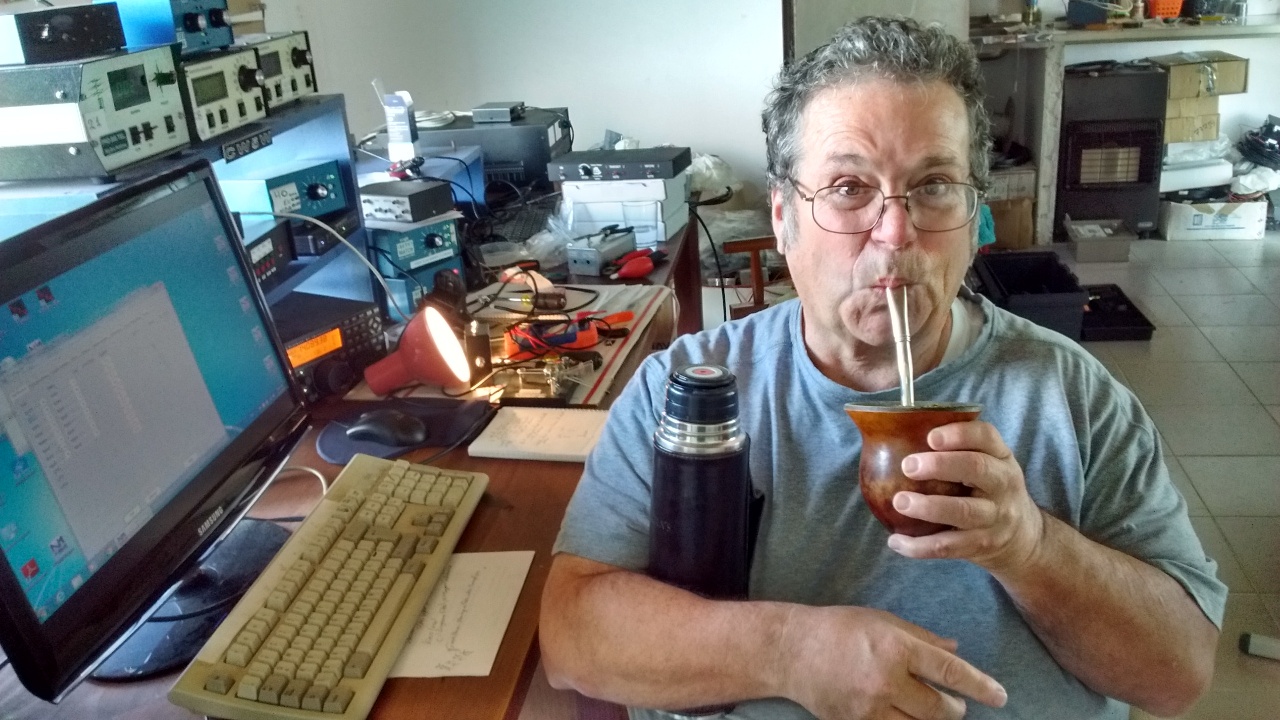 Dennis, W1UE, won the 2015 single operator category as CW5W. Dennis explains “picture of me with my first “Mate”. Mate is the traditional drink of Uruguay. When you walk down the street you will see a lot of people holding the cup and thermos as I am.”

In third place was Angel Sapienza, L77D, with 27,600 points. The other South American stations in the top six were Claudio Kennel, LU7DH, in fourth and Carlos Carareto, PY2VM, in sixth. Sandwiched between Claudio and Carlo was Dave Hachadorian, K6LL, in fifth place. This was Dave’s fourth consecutive North American win and he has finished in the top 5 in all five Ten-Meter RTTY contests. Great job Dave. Massimo Zenobi, KH6ZM, finished seventh overall and won Oceania for the second year in a row, W4DXX (GA) was eighth, K6HGF (CA) placed ninth and N1IXF (CT) rounded out the top ten.

In the multi operator category, Julio Rivera, YV1KK, and his XYL Grecia, YY1YLY, took top honors with 422 QSOs, 94 multipliers and a score of 39,386. LU1AMH, with operators LU1AMH, LU1AET, LU2BPM and LU1BJW were second with 13,608 points. In third place were Mark Aaker, K6UFO, and Tom Berson, ND2T, piloting W1LQ in Maine remotely from California, taking top honors in North America for the second year in a row. 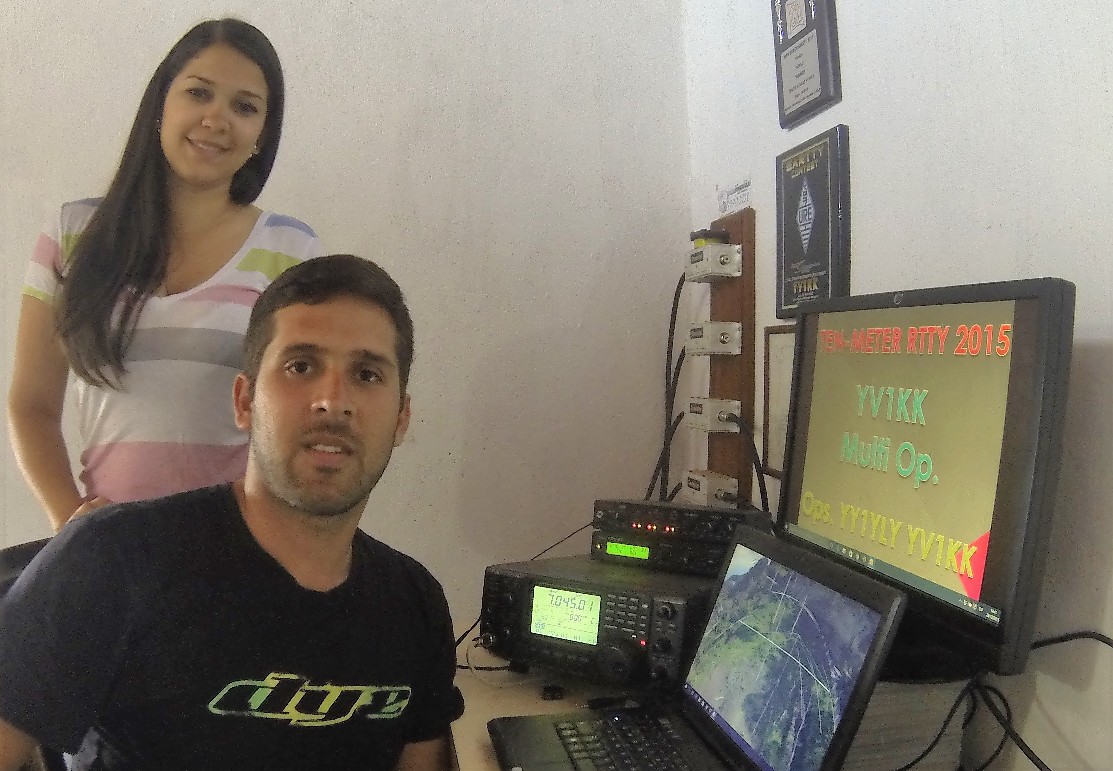 Julio, YV1KK, and his XYL Grecia, YY1YLY, won the Multi Operator category in 2015.

Band conditions for those in northern latitudes can best be described as poor. Dwayne, KD4POJ, said conditions were terrible and could only muster 17 contacts from North Dakota. Mark and Tom (W1LT) struggled to put contacts in the log. From 1200-1400Z they were only able to log seven stations. From my QTH in Louisiana, it seemed like more stations were worked on back or side scatter to the USA than direct path. Early on Saturday I was beaming to the Caribbean in order to work the East Coast. I was able to work some Europeans a little while later but conditions were challenging. Having to work for contacts is not always a bad thing – you just learn new tricks.

The Europeans didn’t do very well either. The top European single operator was Bernard Backaert, ON5GQ, who managed only 110 contacts and placed 34th overall. Stations in Asia had trouble logging contacts as well. Vladimir Dubinski, UN6LN, won single operator Asia but placed only 42nd world-wide. The top station in Japan was JI1RAK with only 95 contacts. Only ten single operator stations had more than 200 contacts in 2015. Last year there were 95 stations that had at least 200 contacts. The multi-operator stations didn’t fare much better with only the top two having more than 200 contacts in the log. Despite all that, there were several positive comments in the Soapbox suggesting people still had fun. I know I did.

Part of the reason for poor conditions in the higher latitudes was due to high A and K index numbers for the entire contest. The solar flux stayed at 101 until the last 3 hours of the contest when it rose one point to 102. The A index was 16, then rose to 26 at the end. The K index fluctuated between 3 and 5 for the entire 24-hour period.

There is no sugar coating the fact that we are slowly losing ten meters as we creep into the latter part of this solar cycle. The question remains – will we have ten meters next year? Ed and I have discussed the future going forward and despite some excellent suggestions from fellow RTTY contesters, we’ve decided to keep the contest going, as is, for next year. The reasoning behind this is the fact that the ARRL 10 Meter Contest, also held in December, seems to remain popular even in low sun activity years. We are hoping the same will be true for the Ten-Meter RTTY Contest.

Thanks to everyone who participated in this year’s contest. There were 500 logs received, and participation from seventy five different countries. Thanks to Ed, W0YK, for the excellent work in gathering the logs. He goes out of his way to contact each and every contestant to try to obtain their log so the log-checking is more accurate. Ed also takes care of the log checking reports (LCR) for the contest. To obtain your LCR, please send email to Ed (ed at w0yk.com) requesting your LCR (put LCR in header of the email).

Thanks to the plaque sponsors and to our plaque manager, Ray Fallen, ND8L. And special thanks to Tom Morrison, K5TM, who was instrumental in writing the software for the online certificates. If you haven’t already done so, be sure to download your certificate here.

No one knows what the future will hold. But we will do it again next year. It may be good or it may not be so good. The fun will be finding out. CU then!